Justification of the award

The thesis of Sara Schnelle (evaluated with 1,0) deals with the conversion of the current airport AICM in Mexico City. Using numerous current examples from Mexico and abroad, Ms. Schnelle demonstrates how the transformation of airport sites can be addressed. She applies the insights gained to the site of the airport in Mexico City, which is currently being redesigned, in an excellent design. She takes into account both the complex urban situation and the difficult soil and hydraulic conditions of the site in the former Lake Texcoco. The design uses carefully chosen landscape elements to connect the location of the previously inaccessible site to the surrounding city. It thus provides a valuable contribution to the current discussion within the city.

Justification of the award

The excellent work of Bernadette Brandl is dedicated to the redesign of the open space at the Geological Faculty in the vicinity of Munich's Königsplatz. Despite its special location, the front area and inner courtyards of the faculty, which also houses the Bavarian State Collection of Palaeontology and Geology, are not very representative.

In her bachelor's thesis, Ms. Brandl develops a trend-setting concept in front of the functional architecture, how the open space can be used as an attractive and student-friendly campus on the one hand and how it can be recognized as the main entrance for the faculty and the museum in the cityscape on the other hand. The interweaving of geological exhibits with recreational and access areas is laid out in an expressive and contrasting design across the eastern forecourt and the Schmuckhof adjacent to the Lenbachhaus.

The conceptual handling of materials, forms and structures, as well as existing and new vegetation, demonstrates Ms. Brandl's excellent spatial and design intuition to create a maximum of urban quality in the limited space available. In doing so, the project sensitively manages to find the right 'volume' worthy of this prominent setting. This achievement, coupled with a very convincing presentation in plans and model, makes this work a particularly successful example for many upcoming final projects at the Faculty of Landscape Architecture and Landscape Planning.

A new setting for Martinsbrunn

Martinsbrunn Clinic and Senior Citizens' Residence. A Mediterranean park in the Alps.

The Martinsbrunn Private Clinic and Retirement and Nursing Home is an institution rich in tradition, which was run by the Sisters of Mercy of St. Vincent de Paul until 2016. The clinic is located in a park surrounded by orchards and vineyards on the northwestern outskirts of Merano. This park needs to be redesigned, its aim still being to provide space for convalescents. The spa clinic was opened at the end of the 19th century and numerous prominent people, aristocrats and artists of the time came here to seek advice and health. At the beginning of the 20th century the park area was designed.

Due to the construction of a new clinic, the park needs new organisation and design. In the future, the park and its surroundings should meet the requirements of accessibility and inclusive design even better. A central theme is the therapeutic effectiveness of open spaces, both as aesthetic "images" of places to stay enjoyed and as spaces for walks and other open space activities. Here, the sequence of diverse and different open spaces and atmospheres is of particular importance. This also means that the park should be linked to the surrounding landscape and settlement landscape and form a meaningful unity with its surroundings. The spatial context of the clinic is to be included in the planning intentions with regard to the quality of the public space, higher-level footpaths, special visual references and land use forms. Music is also an important component in the park, as it was in the times of the classical spa eras.

Justification for the award

Ms. Raphaela Roming succeeded in subtly weaving the new requirements into the existing valuable park structure without altering the essential character traits of the site, yet at the same time adding new design accents. In her analytics she worked out very well the important spatial interrelationships between the park and the surrounding landscape and described the main directions of movement. Her idea of opening the park to the public at the southern edge and developing it into an important panoramic promenade with carefully placed terraces is convincing, as is the idea and spatial formulation of a sunny orangery in the access area to the clinic. Ms. Roming was able to make the 21st century with its new requirements readable in the old park with her design approach, which was sophisticated and at the same time minimalist, and she did this in an elegant way that very much convinced all those responsible and the convent sisters who had lived and worked on the grounds for many decades.

Species protection and recreational use in FFH management

Species protection and recreational use in FFH management; Based on the practical example of the FFH area Oberes Isartal Munich 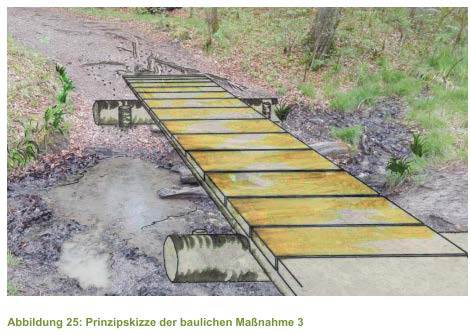 Within protected areas of the Habitats Directive (92/43/EEC) recreational use is allowed. However, this often leads to conflicts with nature conservation.

This bachelor thesis refers to the current conflict between recreational use by mountain bikers and species protection in the FFH area '8034-371 Oberes Isartal' south of Munich. Reptiles and amphibians were considered as the main endangered species groups. In order to identify species-sensitive areas on mountain bike trails, a structure and use mapping was carried out, and potential habitats were assessed according to 'FFH 2010' criteria. In addition, an experimental trial was conducted to determine trends in the actual risk to wildlife from mountain bikers and cyclists. Finally, structural measures are presented which can minimise the conflicts identified.

Justification for the award

Very elaborate work, which provides a sound basis for the analysis of the problem of the conflict of use in the Isar valley. For example, the attempt to estimate the mortality risk of creepers due to bicycle touring has been excellently implemented. Extensive map material has been produced that will certainly be helpful in the further planning process of the project. In its scope and precision, the work makes a new contribution to a difficult field of conflict.