The bdla Lower Saxony Bremen opened the architecture season 2021 with a paddle tour on 17 June. 30 places were up for grabs, most of which were taken by students of the Landscape and Environmental Planning course at the University of Hanover. The tour was fully booked in a very short time, which was not surprising given the attractive offer. 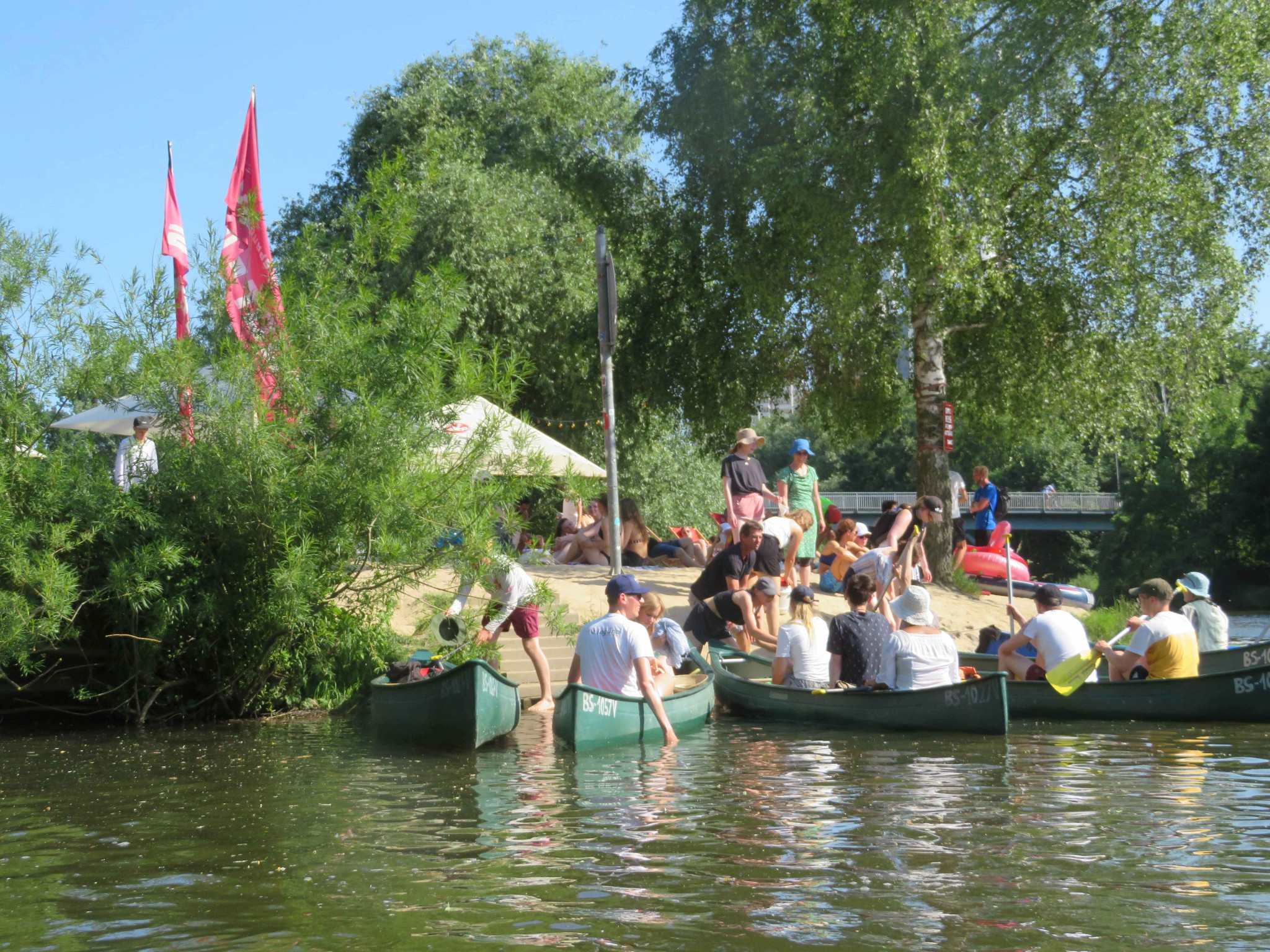 With "Lust auf Grün" at architecture time, the bdla Lower Saxony Bremen has created a format with which the complexity of the "green infrastructure" is made visible to a broad public. In 2018, a wide range of examples were presented during a tour of the Weser during architecture time, and in 2019 a cycle tour took place in Braunschweig on the former Ringgleis track with its wide range of open spaces. This year there was a paddle on the Leine and Ihme in Hanover. The development of the Corona pandemic towards low incidences actually allowed, under certain conditions, that the tour, already planned for 2020, could actually start.

Green (land) and blue (water) nature and open spaces are the basic elements of a network that assumes a variety of ecological and social functions in a city. Leine and Ihme offer in Hannover the possibility for attractive recreation, important nature experience and strategies for adaptation to climate change directly in front of the door in the middle of the big city, which can be explored by paddle boat, giving completely new impressions of Hannover. With a start at the sports performance centre and a few paddling tips, the participants already had a lot of fun on their way to their first destination, the Linden-Süd district park. There, the city of Hannover transformed a public green space, which used to be far behind its possibilities, into a city park. Gwendolyn Kusters, former employee at the Department of Environment and Urban Greenery of the City of Hanover and planner of the park, reported how, with intensive involvement of civil society, an attractive, barrier-free meeting space with a public basketball court, a much-used skate pool and an adjacent pole fitness forest for advanced movement artists was newly built, altogether with sufficient resting areas and barrier-free access to the water. And all this in the flood area of the Ihme.

At the Ihmepark, which was completed in 2017 and is only a few paddle strokes away, was not created. From the boat carpet moving and turning with the current, Gesina Schindler, Sachgebietsleitung des Fachbereichs Umwelt und Stadtgrün der Stadt Hannover im Ruhestand, reported on the planning process, the extremely good cooperation with the civil engineering department during implementation, but also very frankly about the less than optimal participation of citizens. Here, too, the necessary flood protection has influenced the development of the new inner-city park. The wide embankment is formed here on one side with several large terraces, which are closed off with platforms and seating.

The beach bar "Strandleben" at the small headland at the confluence of the rivers Ihme and Leine offered the perfect place for a refreshment break in optimal summer weather. With the continuation of the tour on the Leine it became a bit more strenuous, because now we had to work against the current. You can only guess that the Leine flows through Calenberger Neustadt, which is close to the city centre. Large willows with their spreading branches and lush riparian woods rather suggest a scenic idyll. What is special for Hanover is that this part of the Leine is now also accessible for cyclists and pedestrians via a riverside path. An Expo project that has been successively implemented.

At the Hohe Ufer, the historic city wall, Christoph Schonhoff from NSP landschaftsarchitekten stadtplaner was waiting for us, who completely redesigned this area with his team. In several sections a new city terrace was created here under a lime tree trellis. The Beginenturm was exposed as a striking entrance to the old town. The preservation of the old but varied pavement from the 50s on the lower riverbank path is also special. All in all, existing sandstone was supplemented, the wall and parapets, also made of sandstone, were redesigned according to the requirements of the users.

With the transfer of the boats under the busy crossing Leibnizufer/Friedrichswall/Lavesallee the last section of the paddling tour began, during which the branches of the trees and bushes hanging down into the Leine transported the visitors into another water idyll.

A perfect presentation of "Green Infrastructure" projects, best summer weather and enthusiastic and very satisfied participants who would like to join similar tours again.

next year again at architecture time